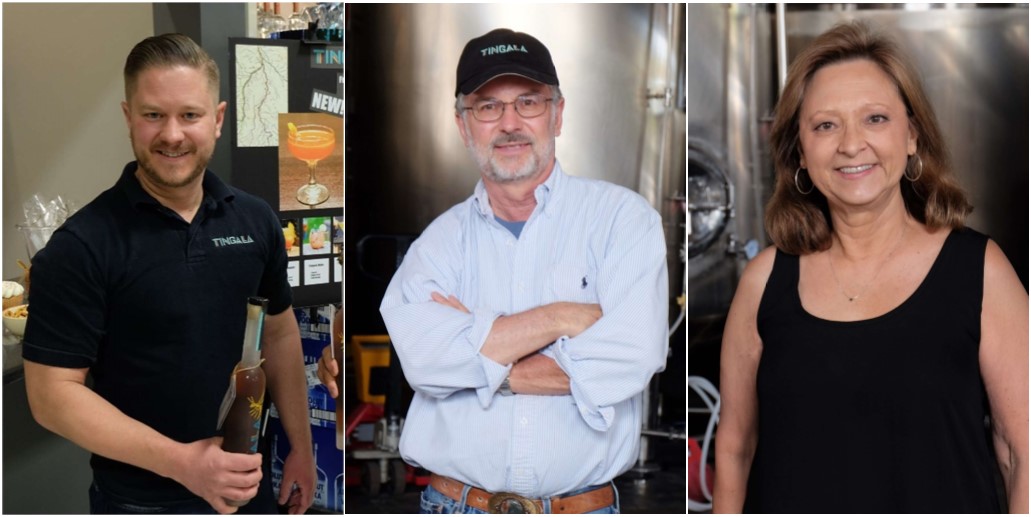 Co-founders Susan, Bob, and Eric Tews are Bringing an Innovative — and Tingly — Craft Liqueur to Market.

About a decade ago, a trip to Prague introduced Bob to absinthe, when it was still banned in the U.S. “I was a gardener and I started to plant wormwood, fennel, and some of the other things that are required,” says Bob, Susan’s husband and Eric’s father.

A TV news photographer by trade, Bob also worked as an intern at Downslope Distilling to learn about craft spirits. “About that time, absinthe became legal and my interest in botanicals expanded to include a little flower I heard about that makes your mouth tingle,” he says, noting that the natural tingling effect earned spilanthes, or Acmella alba, the nickname of the “toothache plant” in its native Brazil. “I grew some of it, played with it, and we came up with the idea of coming up with a formula.”

After landing on a recipe, the first Tingala served was not liquid. “We actually took samples of it and made Jell-O shots of it and took them to a party,” says Bob. “Everybody was like, ‘This is so awesome — my mouth is tingling! You’ve got to make this!’”

They cemented a deal and the formula won federal approval in 2012. After an initial rollout in 2013, the company took a pause while Mile High Spirits readied a new facility. Tingala relaunched with Mile High in 2016, and now is the first contract client of Local Distilling, the Golden-based makers of Vanjak Vodka. “[Mile High Spirits] got rid of all of their private-label business,” says Eric. “It was a business decision for them.”

To make their unique liqueur, the Tewses start with a neutral base spirit made from corn, then they add the crushed flowers, sourced from a grower in California, and a hint of cinnamon. “We use the basic formula of a liqueur,” says Bob. “It’s a very old technique. Almost all of the amaros, the early spirits, were herbal medicines.”

Adds Eric: “We have a proprietary process to extract that tingle. That’s what’s unique about us: fresh flowers, shipped overnight, a unique process to pull out just that tingling sensation.” For that reason, Tingala currently has to build production around the flower’s growing season, roughly from April to November.

The market is responding to the tingly, 100-proof liqueur. “It’s gone great,” says Eric. “I think we grow about 30 to 40 percent a year.”
The company now distributes to more than 100 accounts, about 85 percent of which are liquor stores where 375- and 750-milliliter bottles typically retail for around $30 and $42. Susan says Tingala’s self-distribution model is “more advantageous” than working with an outside distributor due to the single SKU.

“We have some great advocates in the bartending community,” says Susan, citing La Chiva Colombian and Asbury Provisions in Denver and  Zig Zag Smokin’ Burger in Greenwood Village.

Challenges: Expanding beyond Colorado is tricky due to the three-tier distribution system and ever-changing interstate regulations. The result can be a 33 percent hit to the bottom line, and Bob says the cost of sales support in other states would involve an “astronomical” budget.

“We get inquiries from all over the world,” adds Susan. “We can’t ship to them directly.”

Another: “Educating people on our product — how to use it, getting used to a new sensation — is one of those challenges that makes us unique,” says Eric.

Opportunities: “For now, growing in Colorado,” says Eric. “I think we want to look at other states, but it’s going to be some time before we make that jump and that investment.”

Needs: “I would love to see the economic situation improve,” says Bob. “We’re not as exposed as our partners in the restaurant and bar trade. We hope and pray they can pull out of this (pandemic) and be able to survive. That’s going to be critical for our growth and our expansion, but they’re going to be in a world of hurt for a while, and our heart really goes out to them.”