To make: Moisten the rim of a cocktail glass with lemon juice, and coat the rim with sugar. Refrigerate until dry. Combine the other ingredients, and shake well with ice. Strain into the chilled cocktail glass. Garnish with a lemon twist.

Note: The Sidecar reportedly was created for a WWI U.S. Army Captain with a cold. His bartender named the drink after the motorcycle sidecar in which the Captain was chauffeured. The cocktail recipe was first published in 1922 and is attributed to Pat McGarry, a popular London bartender of the era.

We make this drink with Tingala (in place of cognac) in honor of our founder’s great uncle, Army Corporal Jake Derfus (below). He served in WWI in the 371st Motor Transport Corps (M.T.C.) in France. Here’s to Jake. 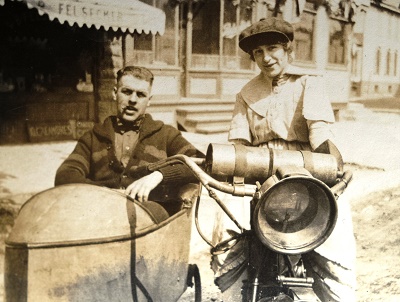