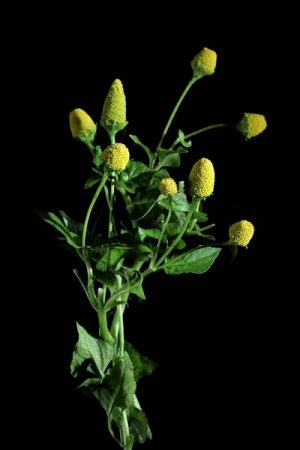 “Buzz buttons are an intense experience for the palate… The flowers take the palate on a crazy journey that can last a few minutes. The (Tingala®) liqueur does the same thing.” – Chris Tunstall, A Bar Above

—Buzz buttons, the flower buds of spilanthes plant, offer an adventure with the unknown, a sensory experience that goes beyond taste. The flowers have a natural effervescent zing, a taste that dances around the mouth and lips, providing a surprising and pleasing mouth tingling experience.

Spilanthes acmella is a tropical plant with small, composite yellow flower buds which is native to Brazil, in a class with daisies, chrysanthemums, and zinnias, members of the Asteraceae botanical family. Many varieties grow in tropical and subtropical regions of the world, including Africa, America, Borneo, India, Sri Lanka and Asia.

People also sometimes call it electric daisy, lemon drop, or Tingflower®. Spilanthes is also known as szechuan buttons, but should not be confused with the Szechuan, or sichaun, peppercorn sometimes used in Chinese cuisine, which is a small, dried herb with tongue tingling taste and spicy heat. Buzz buttons do not have a hot pepper flavor; they do deliver intense tingle.

In Brazil, the botanical is known as paracress, brede mafane, or jambu. Historically it was used by tribes and shamans in the Amazon region as folk medicine as purported treatment for malaria and pain. Spilanthes traditionally became called the “toothache plant” for what some believed to be its natural anesthetic qualities, especially when chewed. Tingala makes no health benefit claims.

While relatively new to many Western palates, the herbal-botanical tingling taste of spilanthes with bright citrus notes is familiar to and embraced by people in other parts of the world. Its sensory pungency and taste make it a popular ingredient in tradition dishes such as tacacá, a northern Brazilian stew made with shrimp, yellow peppers, and wild manioc. It is also a primary ingredient in romazava, a regional dish of Madagascar.

Among other cooks, modern chefs José Andrés of World Central Kitchen and fellow Spanish chef Ferran Adrià of El Bulli have featured spilanthes on their restaurant menus. New York’s Marc Forgione uses spilanthes shavings in his appetizers. “It doesn’t just make your mouth tingle,” he says. “It makes things that are fresh, acidic and bright … just explode. It is a taste-expanding preface to any meal.”

With its characteristic ability to increase salivation which enhances the enjoyment of flavors, Spilanthes is sometimes called the “super taster flower!”